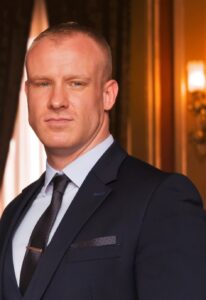 Luka Lesko, PhD, DBA (scientific title: research associate; teaching title: lecturer in the field of security and defense sciences) obtained a PhD doctorate at the University of Zagreb at the age of 29, and then a Doctorate of Business Administration (DBA) at the Swiss School of Business and Management Geneva on the topic “Governance, work scope and budget for security and safety within the project management of the summer Olympic Games from Sydney 2000 to Tokyo 2021: Comparative analysis and future perspectives”.

He has published dozens of scientific articles and the book “Sport and National Security: Terrorism, Espionage and Corruption in Football and Other Sports”, which was awarded the national best scientific book in the field of security in 2020 and nominated for the Croatian Academy of Sciences and Arts Award for the highest scientific achievements that represent exceptional and lasting significance for the Republic of Croatia.

He is the Director of the College of Occupational Safety and Health (part of SSBM Geneva), where he teaches Introduction to Security Studies, Society and Risks, Terrorism Protection, and Corporate Security. At the Swiss School of Business and Management in Geneva, he teaches the course Corporate Security, and so far he has lectured at several faculties/colleges, such as the Zagreb Police College, the course Tactics of Special and Intervention Units in Crisis Situations, and the War School “Ban Josip Jelačić” (the highest military school where high-ranking officers and civil servants from the Republic of Croatia and abroad are trained to participate in the process of making strategic decisions in the field of defense and security affairs at the national and international level), etc. He has reviewed numerous scientific papers for the international scientific journals, and is a member of the Editorial Board of the Global Journal of Business and Integral Security.

He was the director of sport operations the European University Games Zagreb-Rijeka 2016, the most massive multi-sports event held in Croatia, and then headed the scientific department for the development of one of the world’s best ten innovations in sports, presented among the Rio de Janeiro Olympics, developed by a company from Boston, Massachusetts.

He expanded his knowledge at the European Commission, UN Academy, International Olympic Academy, Project Management Institute and Alfred State College of Technology New York, and based on the acquired knowledge of project applications and management, initiated and led consortium which provided the EU grant for educational purposes.

He is a former top-level athlete, a member of the Croatian judo team for eight years in a row.